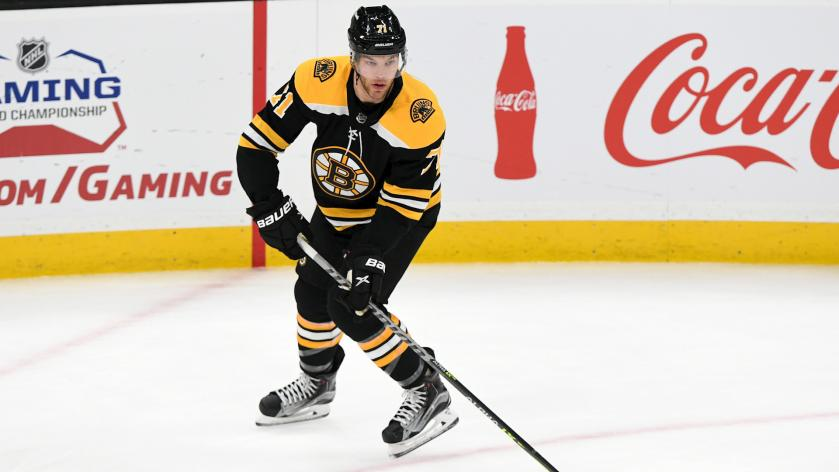 This last Tuesday, the Boston Bruins clinched a spot in the Stanley Cup Playoffs after defeating the New Jersey Devils by a score of 3-0.

On April 11th, after an embarrassing 8-1 loss to the Washington Capitals, the Bruins made noise around the league by making a trade with the Buffalo Sabres to acquire former Hart Trophy winner Taylor Hall along with Curtis Lazar in exchange for Anders Bjork and a 2021 second round pick; Buffalo also retained half of Hall’s remaining contract with the team. Looking back several weeks later, it’s safe to say that Boston committed highway robbery on Buffalo.

Although the Bruins had a very respectable record of 21-12-6 at the time of the trade, the team seemed to be lacking energy over their last stretch of games. They had gone 5-6 in their last 11 games leading up to acquiring Hall, and an 8-1 loss to the Capitals emphasized these struggles.

However, after the 2018 MVP entered the lineup for his first game with Boston on April 13th, the Bruins have gone on an incredible 10-2 run in their last 12 games, including winning six in a row in Hall’s first six games with the team.

Hall clearly had his struggles with Buffalo, arguably the worst team in the league, before coming to Boston. Somehow, Hall recorded just two goals in his stint with the Sabres after signing with the team in the offseason; Hall split time between the Coyotes and the Devils last season.

Now, Hall has slowly started to return to his old self in Boston, and visions of his elite playmaking from his remarkable MVP-winning season are returning. He has recorded 10 points in his first 12 games in Boston, with a very respectable +11 rating while on the ice. Hall’s play has positively impacted his teammates as well. One player that has massively improved since the acquisition of Hall is his new linemate, veteran center David Krejci.

Since Hall’s first game as a Bruin, Krejci’s stats have seen a massive improvement. The Czech international had struggled leading up Hall joining the Bruins, posting just two points in 12 games prior to the Canadian’s arrival. Now, these two have developed an immediate chemistry, and Krejci has gone on an incredible run, likewise scoring 10 points in the B’s last 12 games.

Two other heroes the Bruins have counted on have been their goaltending tandem of Tuukka Rask and Jeremy Swayman. Rask injured himself in a game against the Devils on March 7th, and after other Bruins’ backups weren’t getting it done, Boston called up Jeremy Swayman from their AHL affiliate Providence Bruins.

Swayman excelled in his first eight starts with the Bruins, winning six of those games with a 0.939 save percentage and added a shutout. Swayman’s first game as an NHL player was particularly memorable, making 42 saves en route to his first career win in a matchup over Philadelphia.

After returning from injury, Rask has gone 6-0-0 in his last six games started, posting two shutouts in that span as well. If the Bruins dynamic duo in the net can stay hot in the playoffs, it will be tough for any offense to light Boston up.

With this current streak of success, the Bruins have made the Eastern Division race an extremely tight one. Sitting in third place, the Bruins are just three points behind the Penguins and Capitals, who have 71 points a piece. With just five games left in the season, with strong play and perhaps a little bit of luck, the Bruins may be able to win arguably the toughest division in the league this season.

However, as all hockey fans know, the ultimate goal at the end of every season is to win the Stanley Cup. These upcoming 2021 playoffs marks 10 years since the Bruins last won the Cup in 2011. Although a 10 year passage of time between 2011 and now may seem like a drop in the bucket compared to the previous 39 year drought between the 1972 and 2011 championships, time is running out for the Bruins’ main core to win one last Cup together. Patrice Bergeron and David Krejci are both 35. Tuukka Rask is 34. Brad Marchand is 32. Although it may seem that these Bruins greats are immortal to fans as they have consistently performed at a high level over the last decade, the organization cannot take their longevity for granted; they only have so many years with the team left. The departure of former captain Zdeno Chara should serve as an example of this.

Although the Bruins have constantly been towards the top of the league since their last Stanley Cup Championship with accolades such as a President’s Trophy in the 2013-2014 and 2019-2020 seasons as well as Stanley Cup Finals appearances in 2013 and 2019, these mean nothing without a ring. If the Bruins truly want to take advantage of their hot streak with the boost of the Hall-Krejci pairing, the always elite “Perfection Line” of Bergeron, Marchand, and David Pastrnak, and outstanding goaltending, they will finally figure out their playoff shortcomings and bring Lord Stanley back to TD Garden.