BSU Through the Years: A Timeline and Headlines From the Archives

1968: The Black Student Union was founded.

1969: The College honors student’s petition to eliminate the reference to “Old Black Joe” from the school song “Mamie Reily.”

1969: The College approves black students’ request for a separate corridor in healy hall. Know as “The Black Corridor” and gave the College’s minority students the option of living together, providing a sense of community and support.

1972: The College’s trustees endorsed the admission and enrollment goals expressed to them by the representatives of the Black Student Union.

1973: The BSU proposed for seating arrangements of Black students at the 127th Holy Cross Commencement.

1997: The first Holy Cross Odyssey program began. Odyssey is a one-week summer program for first-year students who are first-generation college students, people of color, and/or those eligible for the Pell Grant. The program was designed to immerse incoming students in the academic and campus atmosphere unique to Holy Cross before the start of their first semester.

2002: The BSU advocated for a daylong event in classrooms to remember and honor Dr. Martin Luther King Jr.

2008: Alumni from across the country returned to campus to celebrate the Black Student Union’s 40th Anniversary. During the anniversary banquet, leading litigator Theodore V. Wells Jr. ’72 delivered the keynote address.

2012: Fraternity, a book by Bloomberg Business Week’s Diane Brady, was released. It tells the story of the first Black students at Holy Cross and their relationship with Rev. John E. Brooks, S.J. ’49 who worked to recruit and mentor them.

2016: Mulledy Hall (named after the College’s first president) is renamed Brooks- Mulledy Hall in light of the institution’s connection to slavery. The renaming integrates the name of Rev. John E. Brooks, S.J. ‘49 in recognition of his efforts to integrate the campus in the late 1960s. The decision came after a committee was charged with exploring the College’s institutional history in connection to slavery and how the College should address the legacy of slavery.

2018: The BSU celebrated twenty years of their annual fashion show. 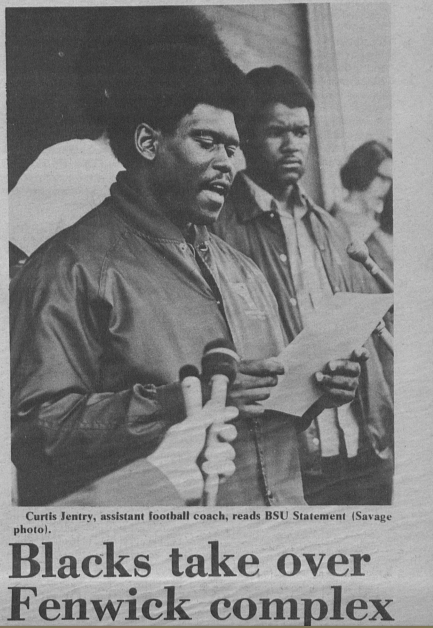