With the 2021 NFL Draft rapidly approaching, football fans across the country are clamoring to know which young prospect will be taken by their teams. With one of the most notable quarterback classes in recent memory coupled with a deep wide receiver corps, teams with offensive needs are salivating at the chance to draft some of these potentially franchise altering weapons. In addition, cornerbacks reign supreme, with a plethora of edge rushers coming in the second half of the first round.

The best quarterback prospect since Andrew Luck, maybe even Peyton Manning. A bonafide superstar with a championship pedigree, and a slam dunk choice for coach Urban Meyer in his first season in the professional ranks.

The New York Jets have been in a state of perpetual mediocrity for the last several seasons, and

the best place to change the fortunes of a team is at the QB position. After dealing former 3rd

overall pick Sam Darnold in the offseason, the Jets will look to kickstart their rebuild with the

Jones’ championship winning resume and quick decision making in the pocket. Jones may not be

a star athlete, but the 49ers talented roster is in win now mode and Jones will plug in

Veteran Matt Ryan might have a few more seasons left in the tank, giving the Falcons a nice

opportunity to develop Fields under a former MVP winner. Maybe Fields will eventually be able

Protecting Joe Burrow should be priority number one for the Bengals, and Sewell is a monster

who should be protecting his blindside for years to come.

Tua Tagovailoa may not have had the most impressive rookie campaign, but it’s still too early to

close the book on him. Adding a top tier receiver should help the young quarterback’s prospects

for his sophomore season.

The Lions need all the help they can get on the defensive side of the ball, and many have Surtain

II as the best defensive player in this draft. The Alabama cornerback should continue a legacy of

dominant Crimson Tide players who continue to excel on Sundays.

If the Panthers are serious about new quarterback Sam Darnold, they will need a young talent to

protect him. If they are going to run it back with Teddy Bridgewater, they will need a young

talent to protect him. Either way, the offensive line is going to be a priority in Charlotte.

Micah Parsons is a do it all linebacker and a freak athlete; pairing him in Denver with Von Miller will invigorate the defense and give John Elway & company a great young piece for years to

The Cowboys have glaring needs all over the defensive side of the ball, but leave it to Jerry

Protecting Daniel Jones is the name of the game for the Giants, plain and simple. They can’t be a

competitive team if their young quarterback is continually running for his life.

The Eagles are desperate for offensive weapons, but not for a lack of trying. Maybe this

will finally be the year they draft a successful pass catcher for young quarterback Jalen Hurts.

The Chargers should be going for the best available player here, and Paye was a monster in

college. Pairing him on the defensive line with Joey Bosa could inspire fear in AFC West

quarterbacks for years to come.

The best defensive player on the board at this point, Horn’s 6’1”, 206 pound frame measures

great for the pros, and he projects to step into an already good Minnesota secondary and sure up

any issues they may have.

Having made a big splash in free agency, it seems unlikely that the Pats go for another wide

receiver such as Devonta Smith. Instead, Bill Belichick goes for a quarterback, hoping he has

back. The Cardinals take a shot on the 6’2” defender, hoping he can help against the onslaught of

talented receivers in the NFC West.

Jon Gruden elects for a pass rusher here, hoping Phillips is someone who can slow down QBs

like Patrick Mahomes and Justin Herbert as the Raiders try to win their division.

With their second pick of the first round, Miami looks to improve on the defensive side of the

ball. Collins being available at 18 works out perfectly for the Dolphins, as the freak athlete with

good size is a prospect any team would be happy to have.

The Heisman trophy winner finally comes off the board, after slipping further that many

expected him to. Washington can not pass up on the value of getting Smith at 19, and elect to

take him over a defensive prospect.

Chicago is heartbroken that Smith went one pick before them, and with the top five quarterbacks

all gone, the Bears decide to keep Newsome playing in Chicago while bolstering their already

The rich get richer as the Colts get to improve its already phenomenal offensive line. With the

retirement of Anthony Castonzo, Vera-Tucker will have the chance to be a week one starter who

will hopefully help Carson Wentz resurrect his career behind this brick wall of pass protection.

The Tennessee Titans are going to be right in thick of the AFC South race next season, and

They got their franchise QB at two, now they’ll prioritize protecting him with the 320 pound

monster out of Oklahoma State.

The Steelers have several needs, including running back and secondary help; however, they opt to pair a young pass rusher up with TJ Watt in hopes of terrorizing the young quarterbacks of the

When you draft the best quarterback prospect in a decade with the first overall pick, finding a talented receiver for him to develop with is never a bad idea.

Cleveland has one of the more talented rosters on both sides of the ball, but the interior defensive

line is an area they could look to improve. Alabama has a history of talented defensive linemen,

and Barmore will look to continue this tradition.

Lamar Jackson might be the most explosive playmaker in football, but his lack of receiving

targets shows. Bateman offers good size for a receiver at 6’2”, and might be exactly what the

Jameis Winston will be the starting quarterback in New Orleans next season, but it is unlikely

that he is the future of the franchise. Mond offers coach Sean Payton a nice project to develop

while their talented roster will continue to compete at a high level.

The hybrid linebacker will be able to play all over the field, being solid in both run and pass

The Bills do not have many weaknesses, but the run game is an area they can definitely improve.

The Alabama standout will be very pleasing to Buffalo fans and fantasy football players alike.

The reigning AFC Champions need help in the trenches on both sides of the ball, but elect to go

defense over offense and bring in the massive pass rusher with huge upside.

Tampa Bay is bringing back every starter from both sides of a Super Bowl winning roster, but 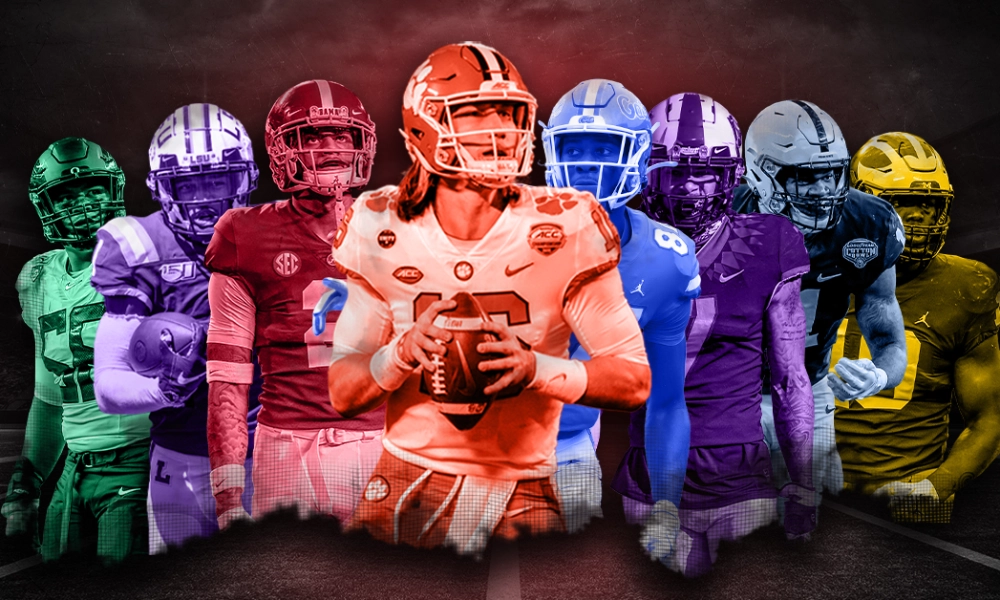