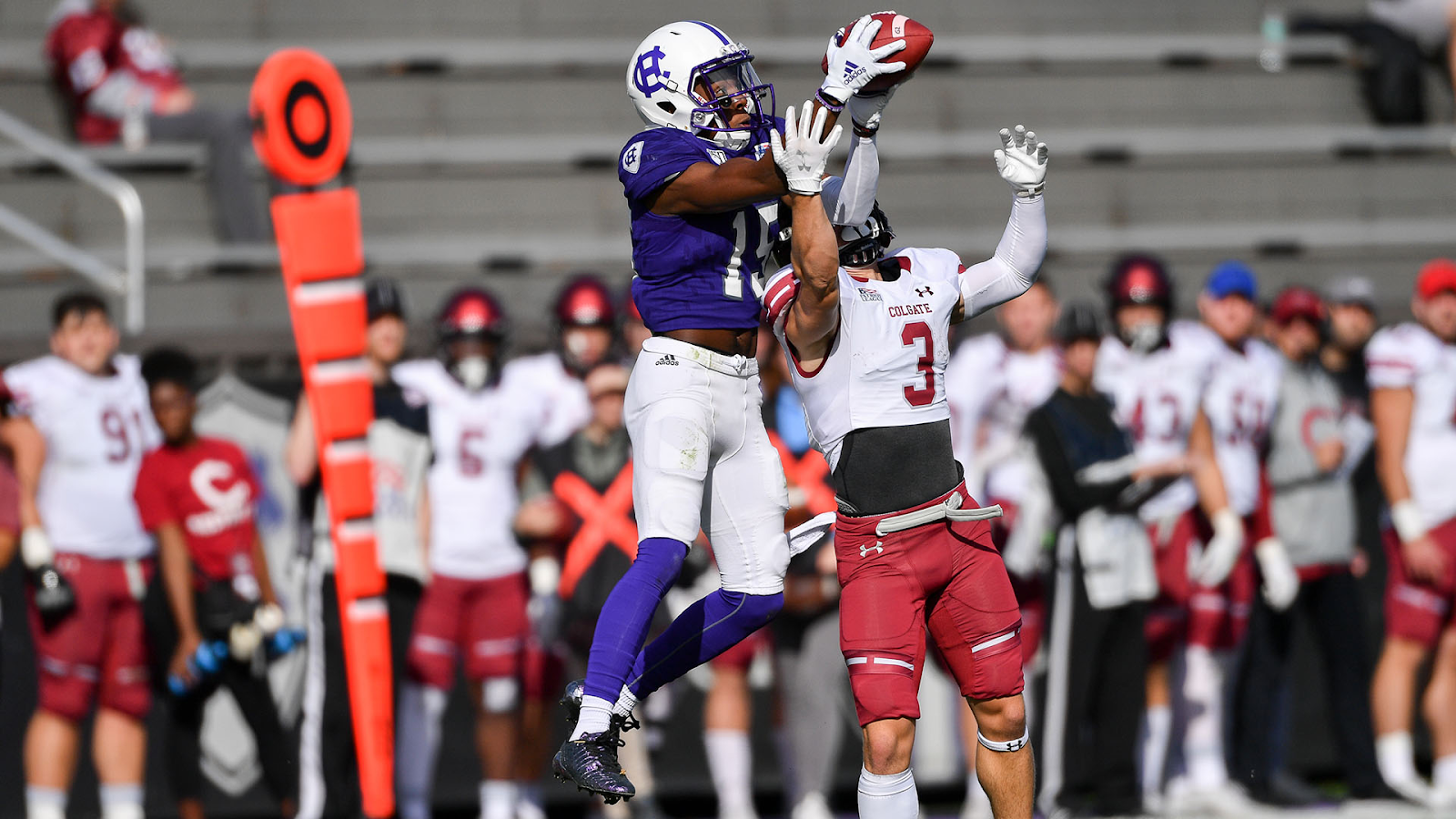 For the final installment of The Spire’s Student Athlete Spotlight, I caught up with Ayir Asante, a sophomore on the football team. Asante had a tremendous freshman season in 2019, earning the title of Patriot League Rookie of the Week on two separate occasions, along with being named to the Second Team All Patriot League at the end of the season.

Off the field, Asante is pursuing a degree in Health Studies, and is involved with the MOCA/WOCA program at Holy Cross.

Below were some questions I was able to ask Ayir about defending the Patriot League title, how he plans on following up a phenomenal freshman year, and more.

Q: Football was one the sports that unfortunately had their season taken away this year due to COVID-19. How are you and your teammates viewing this reality on the bright side to be more ready than ever for next season?

A: The postponement of the football season definitely has taken a toll on the team. Many of us have been playing football since we were seven years old. We’re all really hopeful about the possibility of a spring football season which many other FCS conferences have already announced to play. We eagerly await the Patriot League’s decision on whether or not we are going to play, as we are the last conference across all levels of football (Division 1, 2, 3 & Junior Colleges) to announce our decision. If they were to cancel the season that would be another let down, and we would begin creating plans on the best way to get back playing in the fall of 2021.

Q: Your freshman year, you were arguably the most valuable offensive weapon on your team with 48 receptions for 697 yards and six touchdowns. With your next season on the horizon coming your junior year, how do you plan on making the jump so quickly from freshman phenom to an upperclassman locker room leader?

A: Still hoping for some sort of sophomore season, but whether or not that comes to fruition, I’ve been challenged with becoming a greater leader amongst the team. Having a breakout freshman season brings all the attention to players like me and Jacob Dobbs, who also had some fun his first season here on The Hill. Our success is truly larger than any individual accomplishments; it’s the sum of an organization top to bottom doing their jobs and doing them well. The way I lead is usually by example, so by me staying on course and maintaining my attention to detail I will be able to embrace any leadership role placed upon me.

Q: Football is obviously an extremely physical sport, and keeping in shape during the pandemic must have been a priority for you. However, it is just as cerebral; how have you been able to keep your football mind sharp with concepts such as offensive schemes over the last couple of months?

A: Whilst keeping the virus at the forefront of our considerations I was able to safely and effectively conduct some workouts with other college football players who have also lost their fall seasons. Throughout this winter we’ve been working out, running schemes, concepts, and conditioning at least three times a week. Back in the summer we were able to go five and sometimes six days a week mixing in lifts too. A huge part of the game as you’ve mentioned is the mental aspect. I’ve been able to dive into film more deeply and really start to break down why some things work and how I can implement them into my own game. With all that being said, nothing can replace real time game experience.

Q: As mentioned before, your freshman season was truly one to remember, and although that momentum would have been nice to keep into your sophomore year, what are you doing to ensure that your game progresses instead of regresses?

A: Freshman year was fun but it ended November 30th down in Long Branch, New Jersey. I’ve always felt like the best part of me as a player is the fact that I’m never satisfied. I am grateful for the freshman season that I had but know that it was far from perfect. I also know that perfection is impossible but I work to get as close to it as possible. Even if there ever was a moment in which I meet one of my expectations, I raise it and continue to challenge myself. Being surrounded by hungry guys like Dominik Thomas, Kamryn Molton, and Jonathan Young has definitely helped me as well. We all speak about our goals and know that the only way we’ll achieve them is with relentless fight and endless hard work put in. The hungry dog runs faster.

Q: While your talent as a receiver stands out, what have you been working on in terms of special teams to make sure that you’re a weapon on kickoff and punt return as well?

A: I don’t really express it much openly but I do aspire to one day earn an opportunity at the NFL. Being able to play multiple positions increases my chances at that opportunity whilst also benefiting the team.  I’ve been in contact with HC Alum and Tennessee Titans wide receiver/returner Kalif Raymond since he spoke to the team, and I’ve been picking up gems here and there to help me improve my ability in the return game. Making larger contributions to the special teams game not only as a returner but all over the field is my goal for the next season.

Q: Coming off a season where you and your teammates had just won the Patriot League Championship, what’s the mentality of the team like to make sure you guys can repeat as champions?

A: While we are grateful for it, no one is satisfied with the Patriot League Championship. We still lost six games, we still have yet to win a playoff game, the job isn’t anywhere near done. The team understands that and we are working harder than ever. We’ve gotten a taste of what it’s like, but now we want more. Personally, I want to see HC in a National Championship game before I’m done here. Before we get anywhere near that, we must focus on going 1-0 every week.

Q: Which game from last season do you consider to be the highlight of your freshman year, and can you describe the mentality you had before and during the game?

A: Definitely Colgate. I had my best game statistically versus them. Colgate was also the game I scored my thirds and fourth career touchdown. Going into the game I was expecting to get extra coverage since I had my best game the week before against Brown. Contrary to my belief, I was left in single coverage all game. They basically made the game about me. So I took it personally and made sure that they’d understand who I was. I gave them my all and it worked out in my favor.

Q: Last season, yourself and teammate quarterback Connor Degenhardt were named to the Second Team All Patriot League, a testament to the connection you guys developed on the field. How have you kept this connection alive despite not being able to be together practicing because of the pandemic?

A: Me and Connor were able to safely conduct some workouts this fall to keep our connection strong. Connor sees the game like me so we’re usually on the same page which makes everything else so easy. It didn’t take us long at all to get back in rhythm.

Q: Who’s one receiver in the NFL that you try to model your game after?

A: I’m a huge believer in being yourself and training like yourself. So I don’t necessarily model my game after anyone but I am a student of the game. My favorite player to study is Stefon Diggs. I admire his attitude and playstyle. I also find some similarities between me and him in position, size, and skill set which makes studying him so beneficial to me. I constantly take parts of his game and modify them to add my own spin.