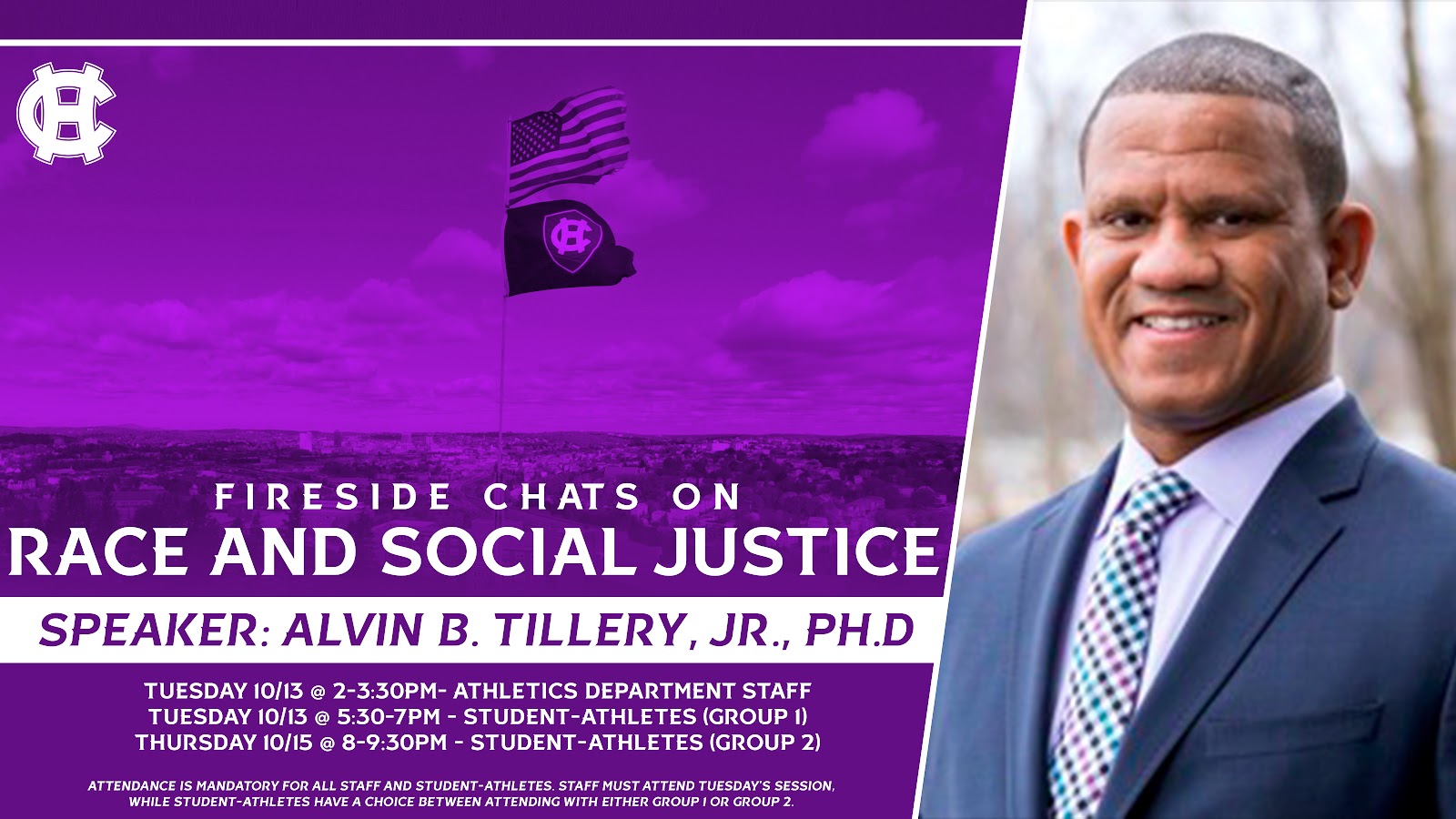 Graphic Courtesy of the Athletic Department

Last week, the College of the Holy Cross Athletic Department hosted a fireside chat webinar for student athletes across all teams on campus led by Athletic Director Marcus Blossom and Assistant Director of Athletics for Student-Athlete Development Aaron Dashiell. The featured guest speaker was Dr. Alvin B. Tillery, a professor of political science at Northwestern University and one of the leading experts on the Black Lives Matter movement.

Tillery, a Massachusetts native who earned his PhD from Harvard University, began by noting a personal anecdote and a connection to Holy Cross. Although he did not attend the College, he is very familiar with Holy Cross athletics. According to Tillery, “Holy Cross was one of the first colleges I ever thought about [attending…]. My entire high school tracked Gordie Lockbaum’s career…”

After more words from Blossom and Dashiell, the question and answer portion of the chat opened up to students. One member of the Men’s Cross Country/Track and Field Team who is also a member of the SAAC Diversity and Inclusion Group asked, “As diversity, equity, and inclusion become an ingrained part of our nation’s culture, what is at stake for this group of athletes at Holy Cross?”

Tillery responded, “When you think about your generation… your attitudes… they are much more progressive than my neighborhood when I was eight years old… which is for the good. What is at stake for Holy Cross athletics is that as you guys grow into the workforce and take part in leadership roles, you will encounter older leaders who don’t have your knowledge, values, and commitment to equality… For Holy Cross athletics to thrive and recruit student athletes in an increasingly smaller pool of people to recruit from, the diversity, equality, and inclusion aspects must be made hospitable to boost recruitment.”

A member of the volleyball team and SAAC Diversity and Inclusion group followed up with, “What are your thoughts on Black Lives Matter versus All Lives Matter claims?”

Tillery responded, “These claims defy the logic of America and are rooted in anti-Blackness. America was founded upon a violent rebellion, upon a promise that all people would be able to achieve life, liberty, and pursuit of happiness. Black Lives Matter is trying to preserve the right to life; to protest that is a fundamental belief to who we are as a culture. Although all lives do matter, Black lives are a subset of the lives of Americans that are killed by 2.5-3 times higher than their white counterparts. It would be as if Holy Cross were damaged by a tornado or hurricane and people tweeted #HCMatters or #HCStrong. Imagine a rival team like Georgetown saying, “Don’t tweet #HCMatters, say ‘Georgetown or all Patriot League teams matter too…’”

Another volleyball team member also part of SAAC and the Community Engagement subcommittee asked, “What can individuals do to combat racism?”

Tillery answered, “What we can do as individuals is press for our entire structure to take these issues of racial inequality into account. Such as how Marcus Blossom is doing with these talks among these athletic departments, it is up to us as equity voters to ensure that who we elect adopts anti-racist policies. We can also demand this type of justice within the local and state levels to ensure that their policies do not promote racial injustices. Where we shop matters, as the places where we shop should strive for equity of all groups, such as those with concrete initiatives, and we can’t shop at stores who don’t. We must also think about our charity, and how we donate to organizations like NAACP and others that support equity, and these are things that you can do as individuals and as an [athletic] department.”

Aaron Dashinell mentioned that “On our webpage we highlight voting and have a partnership with TurboVote.” This was an important follow up to Tillery’s point on how voting is so crucial to making an impact on a personal level to combat racism, and further highlights the department’s commitment to equipping their athletes with tools to take action.

A member of the diversity task force and the women’s lacrosse team asked, “How can the Athletic Department support their workers and student athletes who are engaged with social justice efforts?”

Tillery noted, “First off, by Aaron and Marcus inviting me to be in conversation with you, this is the next step towards normalizing conversations around differences that promote growth. I think the department can also put in place a tolerance across the board where people can have the ability to engage in social justice activities, and people can also choose not to do that and find support. Not everyone is committed to protest or campaign, which is fine, but opportunities must be created in order to understand what your values are, and then you must allow people to not opt out in ways that would subvert your values, and not allow them to shame those who do decide to take action. That kind of culture of tolerance is what all organizations should be doing, and also giving student athletes the ability to build their cultural competencies–it allows them to continue education by reaching out to experts on campus to further their learning to create a healthy organization.”

An anonymous student athlete asked, “My specific team has made a lot of progress in working towards racial equality. How can I, a person not of color, take this progress and implement it into my community back home?”

Tillery answered, “The best way to make changes in the face of recalcitrance is to have honest convos with people–we must challenge bigotry, not in a hostile way, but to show our discomfort with these kinds of statements. We must take time to spread our competency to others. We also cannot do it alone, and make sure to find allies in our community. Equity groups are dying to have young people in their initiatives, so when joining these groups, you won’t feel so alone. Stay resolute and always argue from a point over reason over passion–it’s very hard for people to dispute facts. Change happens when people move in your direction and you move in their direction.”

After the event, I was able to reach out to Aaron Dashinell to further comment on the importance of coordinating such an event for student athletes at Holy Cross. Dashinell remarked, “I know I learned a great deal and hopefully it allows for everyone that participated to feel more comfortable engaging in these types of conversations in the future. Personally, I don’t think we move forward without a clear understanding of our past, how we got to this point, and an agreed understanding of what the overarching issues are. I believe Dr. Tillery did that by outlining specific terms that we all hear and utilize today. He gave his perceived pros and cons to the Black Lives Matter movement, and even gave insight into his own personal traumas growing up, his research as well as his researched evaluations of the political climate of the last decade plus at Holy Cross athletics. I believe we took a big first step in engaging the conversation with this fireside chat. Dr. Tillery’s knowledge of the millennial and Gen Z thoughts and attitudes on race and social justice were among the driving forces in why we thought he would be a great person to lead this initial discussion with our student-athletes.”