Family Weekend a Success, Despite the Rain

By Seamus Brennan During the weekend of Oct. 21-23, the Office of Student Involvement (OSI) hosted the annual Holy Cross Family Weekend at various on-campus sites. The weekend provided an opportunity for students’ relatives to learn about life at Holy Cross. The weekend’s schedule included art exhibits, athletic […] 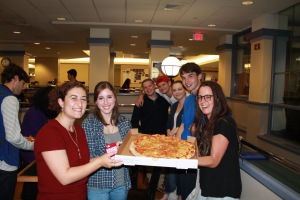 By Seamus Brennan On Monday, Sept. 26, a viewing party for the first presidential debate of the 2016 general election was held in Crossroads. Sponsored by SPUD, SGA Senate, and the Office of Student Involvement, the party included a screening of the first general election debate with pizza […]

By Seamus Brennan Members of the Holy Cross community have experienced difficulties pertaining to issues of multiculturalism and diversity since late August when the 2016-2017 academic year began.  In early September, several off-campus house parties with controversial cultural themes were met with criticism by students and faculty alike, […]

By Seamus Brennan On Saturday, Sept. 10, the College of the Holy Cross officially opened the Thomas P. Joyce ’59 Contemplative Center, following nearly a year and a half of construction. Located in the Wachussett Reservoir, the 33,800- square foot compound rests on a 52-acre hilltop site and […]