Senior Gets All Four of His Classes

Sean Lisa Maurer “Hey! Sweet! That was so easy.” This past Thursday, a senior in Figge went four-for-four during enrollment. “I mean, I’m not surprised. I’m going to be a second semester senior. It makes sense that I get all of the classes that are essential to my […]

Allyson Noenickx ’19 Definitely did not design this logo The Eggplant’s investigative team has uncovered an uncanny resemblance between the late Senator John McCain’s 2008 presidential campaign poster and the logo of our own ACI. For the many dedicated Spire readers who likely don’t know, A Contest of […]

Billy Fitzpatrick ’20Chief Sports Editor The Holy Cross community welcomed home Basketball Hall of Famer Bob Cousy, Class of 1950, last Friday night at Seelos Theater on the campus of the College of the Holy Cross. Making the short journey to Mount Saint James from his home of […] 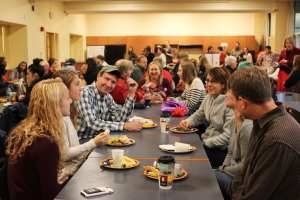 Family Weekend Offers Fun for All

Ethan Bachand ’22 News Editor From October 26 to the 28, the College of the Holy Cross hosted its Family Weekend with a variety of activities throughout the campus. Despite less-than-favorable weather, different events were put on by a wide variety of organizations for students and their families. […]

Billy Fitzpatrick ’20 Let’s take a look at how Holy Cross athletics teams in action have been faring recently. Football The Holy Cross Football team (2-6) made a statement by defeating Patriot League foe Lehigh 56-0 last weekend in Worcester, Mass. The Crusaders put on a great display […]

Eaton D. Condiment Lost in the Sauce “At first I thought it was some sort of sick joke,” said jaded junior Neil English. “But when I got closer to the condiment station in Kimball I saw that it was true, Heinz condiment dispensers had been phased out with […] 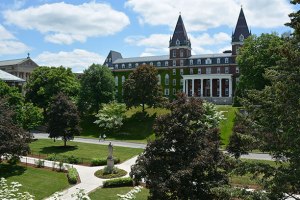 Jackie Cannon ’20 Chief News Editor   The College of the Holy Cross community received a report of aggravated battery and assault against a student, committed in the early morning hours of October 27. The report contained few specifics of the incident, which is currently under investigation, but […]

Henry W. Noe ’22 Opinions Editor With the amelioration of the internet and e-readers, libraries are becoming less and less sought out as a valuable resource. Individuals are less inclined to pursue their local library when in search of a certain resource or in need of assistance; the […] 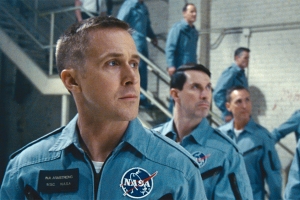 Tyler Christiansen Staff Writer Damien Chazelle, writer/director of the critically acclaimed films Whiplash and La La Land, creates another near-perfect film about the trials of the NASA program through the eyes of Neil Armstrong. Josh Singer, writer of Spotlight and The Post, adapted the screenplay from James Hansen’s […]

Jackie Cannon ’20 Chief News Editor On Saturday, October 27 at 8 a.m., the College of the Holy Cross will hold the Crusade Against Cancer 5K for its fourth year. The race is held in honor of Henry Carr ’19, who passed away after a battle with cancer […]

Seniors Use Ignite Fund to Conduct Research in Rwanda

Allyson Noenickx Editor in Chief This summer two Holy Cross seniors, Izzi Lambrecht ’19 and Tessa Varvares ’19,  travelled to Kigali, Rwanda to conduct research on gender-based violence and how it is addressed in the country. Their self-designed, interdisciplinary research project was made possible in part by Holy […]

Maggie Flaherty ’20 Sports Editor I would like to preface this diatribe by noting that Red Sox reliever Craig Kimbrel is, historically, a statistically-reliable closer and a talented pitcher. But this needs to be said. Kimbrel went five-for-five in saves in the ALDS and ALCS, but those saves […]