Patrick Grudberg ‘24 Staff Writer The Holy Cross football team’s season came to an end on Saturday, April 24th, suffering a crushing loss to the South Dakota State Jackrabbits in the first round of the FCS playoffs by a score of 31-3.  While it’s tough to find any […]

The Power of Positivity: Guest Speaker Ivy Watts on Mental Health in Athletics

Jocelyn Buggy ‘22 News Editor On the evening of April 26, the Student Government Association (SGA) emailed the Holy Cross community with the results of their 2021 elections.  After three years of service in the SGA, Maggie Ober ‘22 and Connor McNerney ‘22 were elected as Co-Presidents for […]

Kelly Gallagher ‘22Ethan Bachand ‘22Editor-in-Chief Chief News Editor After serving as president of the College of the Holy Cross for nearly 10 years, Rev. Philip L. Boroughs, S.J., plans to retire at the conclusion of the 2020-21 academic year. In an exclusive interview, The Spire spoke to Fr. […]

A Classic Novel’s Journey to the West at Holy Cross

Hui Li ‘21 Co-Chief Graphic Designer What happens when you combine a 16th-century fantasy novel with a pandemic in the 21st century? For Dr. Ji Hao, Professor of Chinese at the College of the Holy Cross, the answer was an online conference. On Tuesday, April 20, he hosted […]

By Mike O’Brien ‘23, Chief Sports Editor Ethan Bachand ‘22, Chief News Editor After handily defeating Bucknell in their own backyard by a score of 33-10, Holy Cross claimed their second consecutive  Patriot League Championship.  Although the Crusaders were only able to play two regular season games before […]

Quidditch and their fall from grace

Mario Micallef ’22 Hairy Porter Extra! Extra! Read (or at least skim most of it so that you feel decently confident to speak about it if called on or asked) all about it! The headmaster’s letter! Quidditch cancelled! Defies tradition! Shocking! You won’t believe it! Click here now […]

Mike O’Brien ‘23 Chief Sports Editor We’re just about two weeks into the MLB season, and there’s already plenty of storylines to unpack as the MLB settles into its regular 162 game season after last year’s was shortened due to the COVID-19 pandemic. New York Underperforms  After the […]

Davey Sullivan ‘22  News Editor The Holy Cross Student Government Association (SGA) has announced that elections for schoolwide positions will be held next week. These elections put in place Class of 2022 Commencement Chairs, Senators at Large, Class Senators, Class Councils, and the Co-Presidents of the school.  The […]

The Return of Cheer at Fitton Field

Caroline Wallace ’23 Features Editor Last spring, when the pandemic sent everyone home from school, the competitive season for Holy Cross’ cheer team came to an abrupt stop. The cheer team had been preparing all season to finally be able to compete at the NCA Nationals in Daytona […] 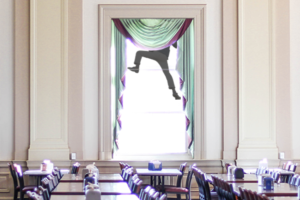 Michael Vail ‘24 Freelance Reporter Prodigy Saturday, April 10, 2021, 7:23 p.m. Kimball Hall is roped off from the rest of the campus and firetrucks swarm the area. Starving students beg acquaintances for usage of their remaining dining dollars. Panic ensues. Hello folks, this is a broadcast live […]

Hui Li ‘21 Co-Chief Graphic Designer On Friday, April 9, the College of the Holy Cross announced a set of new restrictions for students to combat the spread of COVID-19 in the community, effective 6:00 p.m. on Friday, April 9 until Wednesday, April 14, when the College will […]