Patriots Won the Important One: Obviously, this one did not go the Patriots’ way, for many reasons which I will later discuss. But regardless of the outcome in this game, it was nice to be reminded of how great the last time the Patriots played the Seahawks was. […] 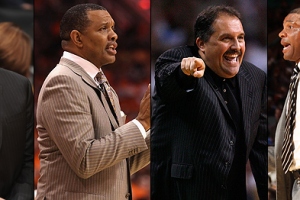 It is no secret that our country has been divided during this national election, with Trump and Clinton splitting the popular vote almost 50/50. What is a little more surprising, however, is the contrast between the NFL and the NBA’s responses to the election’s results. The NFL and […]

I worried that I wouldn’t have anything new to write about with the Patriots on bye week, sitting nicely atop the league at 7-1. Aside from saying the usual “they need to keep up the good work but improve slightly on defense,” I wasn’t sure I had anything […]

Men’s Soccer Falls 1-0 to End Season Last Saturday, the Men’s Soccer team ended the season with a 1-0 loss to Loyola Maryland. Within the first ten minutes, it looked as if the Crusaders were to take an early lead; however, the Loyola keeper came up with an […]

In the first quarter of last Saturday’s game between the Cleveland Cavaliers and Philadelphia 76ers, LeBron James scored his 26,947th point, cementing himself in the top ten of the NBA’s all-time scoring list. With that historic layup, LeBron became the first player in league history to be in […]

For the first time in 10 years, Holy Cross field hockey made the Patriot League Tournament and got the opportunity to play for the trophy. The Crusaders finished their regular season with a record of 9-9. They took on American University at Boston University on November 4. Going […]

A Championship 108 Years in the Making

It had seemed as though the Chicago Cubs would never even make it to the World Series, let alone win one. In fact, it had been 71 years since the Cubs even won the National League Pennant. That same year, World War Two ended. Our country has been […]

By John Albinson We’re all aware of what happened this summer. Less than a month after the Cleveland Cavaliers beat the Golden State Warriors in the NBA Finals, superstar small forward Kevin Durant inked a two-year, $54.3 million deal with the runners-up. We all know that the Oklahoma […]

After coasting to a nice 41-25 win against the Bills, the Patriots now sit comfortably at 7-1 atop the AFC and AFC East. Even Rex Ryan admitted that his 4-4 Bills would now be playing for a Wild Card spot, seeing as they are three games behind the […]

Soccer Loss to Colgate The Crusaders fell 3-0 to American University away last Sunday.  The American University Eagles struck early in the first half, converting on a deflection that resulted from a corner kick.  The rest of the half was quiet, as Holy Cross keeper Bobby Hurstak only […]

Exciting news came to the Holy Cross field hockey program this past weekend, as they found out they are the number three seed in the Patriot League Tournament. This year’s tournament will be held at Boston University on November 4-6. This marks the first time that field hockey […]