By Aine Doyle This week, the College of the Holy Cross launched its first edition of the Journal of Global Catholicism. The new electronic journal, or e-journal, is an extension of the Catholics & Cultures website initiative that was launched in 2015, and is published by the College. […]

By Seamus Brennan On Monday, Sept. 26, a viewing party for the first presidential debate of the 2016 general election was held in Crossroads. Sponsored by SPUD, SGA Senate, and the Office of Student Involvement, the party included a screening of the first general election debate with pizza […] 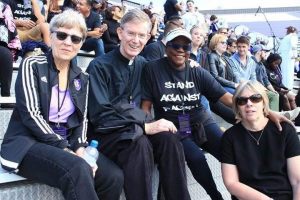 By Allyson Noenickx This past weekend, the College of the Holy Cross welcomed alumni back to campus with the College’s annual homecoming weekend. The weekend featured a pep rally and a football game against Dartmouth. Last Friday evening, the Purple Key Society kicked off the weekend’s festivities with […]

By Lauren Hayward A total of 290 juniors are studying abroad this academic year, and a myriad of sophomores are already making plans for next year.  The staff in the Office of Study Abroad is available to advise students through their decision-making process.  The programs abroad are coordinated […]

By Kelsey Littlefield On Saturday, Sept. 24, 130 College of the Holy Cross students partook in a sit-in during the homecoming football game as a sign of solidarity in light of recent racial tragedies and the continuing racial dialogue permeating the campus. All Holy Cross affiliates—students of color, […] 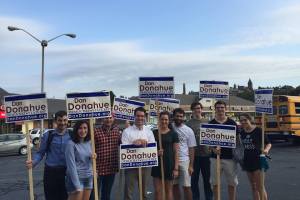 By Caroline Ahearn On Friday Sept. 223, the Holy Cross College Democrats worked hand-in-hand with the “Committee to Re-Elect Dan Donahue” on a stand-out that took place on the corner of Cambridge and Southbridge Streets in support of Donahue, a 2009 Holy Cross alumnus and State Representative for […] 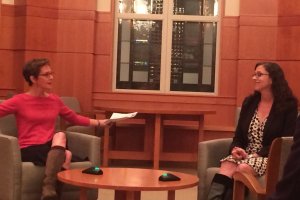 By Allyson Noenickx On Thursday, Sept. 8, Worcester issued a Stage 3 Drought Emergency. Decreased rainfall this summer has prevented Worcester’s reservoir system from recovering from a dry 2015. Under the Stage 3 restrictions, all outdoor water use has been banned, and new landscaping is strongly discouraged. The […]

By Kelsey Littlefield On Friday, Sept. 23, Patrick Dougherty, Holy Cross’ current artist-in residence, revealed the design of his “stickwork” sculpture to the Holy Cross and greater Worcester community in a public outdoor lawn reception on Linden Lane. The reveal was co-sponsored by Arts Transcending Borders (ATB), the […]

By Seamus Brennan Members of the Holy Cross community have experienced difficulties pertaining to issues of multiculturalism and diversity since late August when the 2016-2017 academic year began.  In early September, several off-campus house parties with controversial cultural themes were met with criticism by students and faculty alike, […]

“Discussing Race in the Classroom & Beyond”: Campus Fishbowl Promotes Dialogue

By Isabel Tehan On Thursday, Sept. 15, a fishbowl discussion entitled “Discussing Race in the Classroom & Beyond” was held in Rehm Library, where students, faculty, and staff came together to discuss racial identity within the Holy Cross community. Fishbowl discussions facilitate conversation, provide a safe space for […]

By Seamus Brennan On Saturday, Sept. 10, the College of the Holy Cross officially opened the Thomas P. Joyce ’59 Contemplative Center, following nearly a year and a half of construction. Located in the Wachussett Reservoir, the 33,800- square foot compound rests on a 52-acre hilltop site and […]