Crusader of the Week: Gracie

Kelly Gallagher ’22 Chief Features Editor On September 18, the Working Writers Series kicked off the semester in Rehm Library  with two stirring readings by College of the Holy Cross’ very own Professors Leah Hager Cohen and Oliver de la Paz. Both authors, each with several publications to […]

Joe Begg ’21 Features Editor A few nights ago, I talked to two members of the Men’s Basketball team about how they’ve changed, both personally and as members of a team—a team going through a few changes of its own. Holy Cross’ new coaching staff, specifically recently-hired head […]

This Women-Run Company is Changing the College Jewelry Game

Meghan Shaffer ’20 Staff Writer When you think about college jewelry, the first thing that comes to mind is bound to be the typical college class ring. Big, a little old fashioned, with a large colored stone on top, likely the same kind that your parents and even […]

Avengers: Endgame Lives Up to the Hype (Spoiler-Free)

Kelly Gallagher ’22 Features Editor It’s the moment fans have spent a year waiting for. Following the jaw-dropping cliffhanger of “Infinity War” and one of the most secretive marketing campaigns ever, “Avengers: Endgame” has arrived in theaters. Lovingly made with the fans in mind, full of inside jokes […]

Margaret Goddard ‘19 Features Editor This past week, the senior Studio Art majors opened their exhibition, titled “Ennead,” at the Cantor Art Gallery on campus. “Ennead” is a word that means a group of nine and reflects the ancient sanctity of that number. The nine senior majors have […]

Kennedy Corrado ’21 Features Editor And in an instant, the snake explodes into butterflies. Taylor Swift’s new pop single “ME!” with Panic! At the Disco’s Brendon Urie signals a new era and another drastic reinvention of her career. Swift made it out of the Reputation era looking better […]

Kelly Gallagher ’22 Features Editor I had my reservations about “Unicorn Store.” The trailer was charming, but the idea of the quirky young adult grappling with the dream-killing, soul-sucking adult world is so frequently rehashed I worried this take on it would be stale. But I thoroughly enjoyed […]

Clarabel Smith ’20 Opinions Editor Last week, the clock face on Fenwick clock tower was lit up blue, but like me for most of the week, students might have been too busy running between Stein and Dinand on a caffeine high to notice, let alone wonder why. But […] 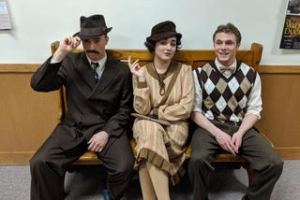 Once in A Lifetime

Maggie Flaherty ’20 Chief Features Editor The Holy Cross Theater department’s performance of “Once in A Lifetime” is a sharp satire that harnesses the magic and grandeur of the early Hollywood era. The show will be performed in the Fenwick theater this weekend. The play, written by George […]

Clara Smith ‘20 Staff Writer Last week, the clock face on Fenwick clock tower was lit up blue — but like me for most of the week, students might have been too busy running between Stein and Dinand on a caffeine high to notice, let alone wonder why. […]